Family Game Night at David Street Station has just been taken to a whole new level thanks to the talented Core Construction students at the Pathways Innovation Center.

Several months ago, Kevin Hawley with the Downtown Development Authority approached Rob Hill, the Core Construction instructor at Pathways, with an idea that would amplify the traditional table top connect four game concept. After months of researching and planning by the students, construction began just three short weeks ago.

“It’s always nice to work with people from the community, but this project was particularly engaging because it made us look at things differently. It required critical thinking and research on the students’ part,” said Hill.

According to Hill, about 30 students participated on the project, starting with an empty trailer donated by Foss Toyota, and building it from the ground up. “Team work, collaboration, ideation and a lot of testing is what made the project a success in a short amount of time,” said Hill.

The Casper community and visitors are encouraged to attend the 3×3 event this weekend, enjoy the amenities at David Street Station and take their chance at some giant Connect Four Basketball! Don’t miss a shot, or your opponent may connect a line of basketballs before you.

Hope to see you down there! #WhereCasperComesTogether 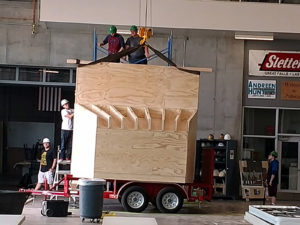 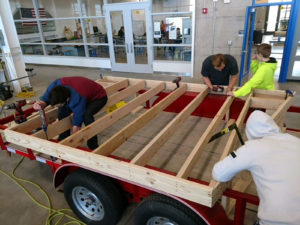